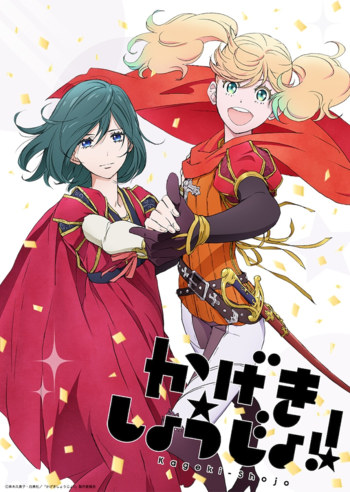 The Silver Bridge awaits!
"Everyone must have noticed it in that moment. Without thinking, they looked up in the sky and saw themselves there. But did they see what I saw? That amongst the sea of glimmering stars, there was one bright star, shining above all others?.. That star was Sarasa Watanabe. That was where she belonged. Where I belonged. I want to see the world from up there."
Advertisement:

Ai Narata, a quiet girl who hardly ever smiles, was popular as a "cool" member of the Idol Singer group JTX48, but recently had to leave it. Hating attention from fans, she resolves to start a new life as a student in the Kouka Music School, where girls study to become actresses of a magnificent theatre company that is totally not the Takarazuka Revue. She meets and is assigned as roommate to the loud, outgoing Sarasa Watanabe. Initially, there's friction between the polar-opposite characters, but eventually, they will forge a road into the starry sky together.

A manga by Kumiko Saiki, originally serialized in the Seinen magazine Jump Kai from 2012 to 2014; however, in a rare move, the manga was restarted in the shoujo magazine Kiss in 2015, where it is still ongoing. The manga got adapted into an anime in the Summer-Autumn 2021 season.

Not to be confused, but inevitably to be compared, with Shoujo Kageki Revue Starlight, seeing as both franchises take inspiration from the Takarazuka Revue. Kageki Shoujo is considerably more realistic, and does not contain massive underground stages, sword battles, or a talking giraffenote except, of course, Sarasa. The amount of yuri hints among the main cast is also considerably lower, in line with Takarazuka's official disapproving view of such relationships among its actresses; a likely schoolgirl lesbian appears in a backstory part of an episode but she never joins Kouka. Kageki Shoujo is not an "answer" to Revue Starlight, as the manga was created a few years before that franchise.

The anime and manga contain examples of: