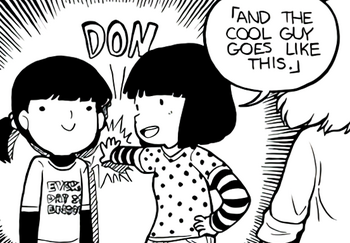 Alice runs into Bob, but Bob is acting very strange today. He may have had a Green-Eyed Epiphany of some sort, is upset that Alice is avoiding him, or just at the breaking point of being repeatedly insisted that he's not a potential Love Interest. Regardless, his emotions have built up to the point he can't contain them. Alice may be Oblivious to Love, refusing to admit how she feels, or just simply unsure. The moment Alice tries to leave, Bob quickly slams his hand on the wall and traps her against it with his body, stopping her from running away. It's a way to intimidate her, but also a way for him to get physically close to her.

It may not have been The Love Slap of Epiphany, but it does get the message out through and clear. Alice becomes more and more confused about how she sees Bob. Usually it results in a case of They Do.

This trope is better known to the Japanese public as the "kabe don" (wall pound). It's when a character (usually Always Male, at least in heterosexual pairings) physically corners a Love Interest using the body to block any chance of escape. It's often accompanied with a "BAM!" sound effect from pounding the wall (the "don" in kabe don). The Wall Pin Of Love is often Played for Drama and increases tension between the characters. It may be given with an Anguished Declaration of Love or a Forceful Kiss from the person doing the Wall Pin. May also lead to Wall Bang Her. A well-known parody of this originating in the Japanese Twitterverse was known as the "semi don"

(cicada block), uses both arms and legs, and was subject to much Memetic Mutation.

The Wall Pin of Love is a very popular staple in Shojo and Yaoi romance. Many news outlets have reported that it is the "ideal" scenario for many Japanese women. Despite this, the Wall Pin of Love can lead to Unfortunate Implications because the emotional and physical intimidation is common in domestic abuse. Because of how frequent and popular it is in Eastern works, there may be Values Dissonance involved in how it's accepted. People in the West are more likely to see the Wall Pin of Love as anything but romantic, and even a bit rapey.

Outside of a romantic context, the Wall Pin can simply be used to intimidate people. A Loan Shark might use it when he doesn't get his money. However, if it's simply a Neck Lift applied to a wall or shoving a person into the wall, then it doesn't count. The Wall Pin has to involve someone trapping another with the body. In less serious works, this may be Played for Laughs by having the victim assume they're being flirted with.

Unlike Pinned to the Wall, this generally involves no pointy objects.