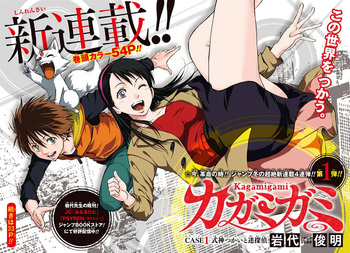 The shikigami user and the great detective
Advertisement:

Kagamigami is a manga series created by Psyren creator Toshiaki Iwashiro, It tells about a boy named Kyosuke Kagami a Shikigami user along with his two companions Hakutenamru and rashomaru and an aspiring detective named Mako Miyoshi together they solve supernatural cases committed by evil Shikigami users.

The series was published in Shonen Jump from February 9th to November 16th 2015 and consisted of 39 chapters.