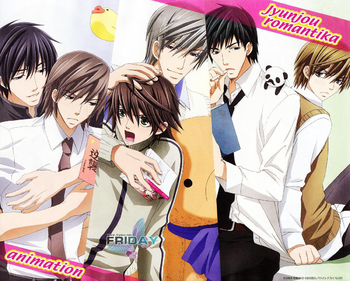 Junjou Romantica is an ongoing Boys' Love manga by Shungiku Nakamura, which began in Asuka Ciel in 2002. It follows the interrelated stories of three different couples as they navigate the ups and downs of romantic relationships. The series has an anime adaptation, the first season of which ran for 12 episodes from April to June 2008, and a second season running another 12 episodes from October to December 2008. In March 2012, an OVA was released alongside the manga's 16th volume. A third season later aired as part of the Summer 2015 Anime season.

The central pair are university student Takahashi Misaki and Usami "Usagi-san" Akihiko, an eccentric, award-winning author. The two get off to a rocky start: Misaki has been raised by his older brother Takahiro ever since the two lost their parents years ago. Takahiro is oblivious to his good friend Usagi's unrequited love for him, but Usagi's feelings are obvious to Misaki. Misaki dislikes Usagi at first, but comes to sympathize with him and the two grow closer. When Takahiro and his new wife move away, Misaki moves in with Usagi to remain close to his college of choice. Despite often being at odds with each other, they fall in love.

Temperamental Kamijou Hiroki is a childhood friend of Usami Akihiko (yes, that kind of friend). Hiroki is heartbroken over his own unrequited love when Kusama Nowaki unexpectedly enters his life. Nowaki is an orphan who started working straight out of junior high; aiming for college, he asks Hiroki to be his tutor and won't take no for an answer. This being a BL series, the situation leads up to a love confession from Nowaki. Hiroki is initially reluctant, but Nowaki's kindness and persistence win him over. Their story picks up again six years later, a year after Nowaki suddenly left to study medicine abroad. When he returns just as suddenly, Hiroki is forced to think about what Nowaki means to him and the two must reevaluate their relationship.

Miyagi Yoh is a college professor and a colleague of Hiroki's. First seen playfully teasing the easily ruffled Hiroki, it is later revealed that his cheerful demeanor actually covers up a deeper sadness caused by a tragedy in his past. Miyagi finds an unlikely suitor in Takatsuki Shinobu, a high school student and his ex-wife's younger brother. Miyagi continually rejects him, but Shinobu stubbornly refuses to give up his pursuit. Miyagi begins to realize that he needs to move on and that Shinobu's affection may not be so unwanted after all.

Isaka Ryuuichiro is secretly in love with his caretaker and former Childhood Friend Asahina Kaoru. However, Asahina seems to be obsessed with Isaka's father... or so it seems.