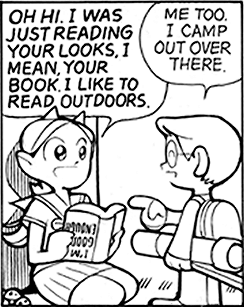 If a character is doing something they want to keep secret and are suddenly interrupted (perhaps by a knock on the door), they will often grab a book to make it appear that they were reading and not scheming against the villain. When they do, they will be holding the book upside-down when the door opens because they were too rushed to ensure they were holding it properly. It makes little sense since most people store their books oriented properly. (It makes more sense if the book was just lying around somewhere.)

For added comedy, the person who arrived may take the book and rotate it for the reader's benefit.

Occasionally, the character who was pretending to be reading will be holding the book right side up, but, since the book is almost invariably chosen at random, its subject matter is likely to be something the character wouldn't read about under normal circumstances.