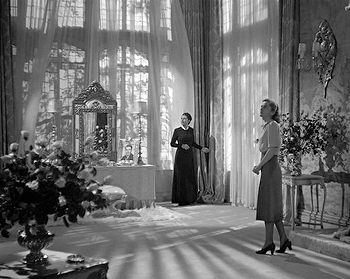 "This place is huge! Dammit, why do rich people have to live in such huge houses?"
— Hayate Ayasaki, Hayate the Combat Butler
Advertisement:

A big, well-appointed home is a symbol of wealth and status almost anywhere, varying based on facets including its location and relative opulence.

There are many culture specific variations on this these, based on the economics situation of the culture depicted. What is considered an impossibly huge dwelling in one culture may be a standard middle class house in another culture. For more information on how this applies to Japan, see the Anime & Manga section.

If a house is awe-inspiring for reasons other than size, it might be a Cool House, though there's certainly quite an overlap. Compare also to Old, Dark House and Big Fancy Castle. Symbolic Glass House is almost always a subtrope. Contrast "Friends" Rent Control, where the home (or apartment) doesn't have to be all that large or luxurious objectively, but it's enough so for the location that there's no logical reason why the character should be able to afford it. Also the indication of wealth is not always solid if the home has a dark history or was offered cheaply for obvious reasons. This trope is the antithesis to Horrible Housing, which is small, cramped, and meant to emphasize the poverty of its inhabitants.

Often a hideout for the supervillains, especially of the rich nobles.