Film / Thank You for Smoking 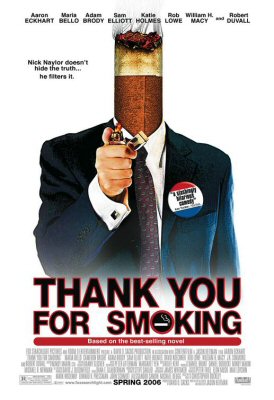 "You know that guy who could pick up any girl? I'm him — on crack."
— Nick Naylor
Advertisement:

Thank You for Smoking is a 1994 novel written by Christopher Buckley and 2005 dark comedy film directed by Jason Reitman and starring Aaron Eckhart, William H. Macy and Katie Holmes.

Eckhart's character, Nick Naylor, is a lobbyist for the big tobacco corporations, and his job is to defend them in the moral, economic and social arena of the United States. The film asks many questions about the morality of smoking versus free choice. The main plot of the film is Naylor's progression through different mindsets in the tobacco industry, particularly as he tries to appear as a good role model to his 10-year-old son. Although the film doesn't take a strong stance for or against smoking, it teaches us that "the great state of Vermont will not apologize for its cheese."

It's worth noting that while the movie deals with smoking advertising in films, it never once shows a character actually smoking. Make of that what you will.

Thank you for smoking the following tropes: