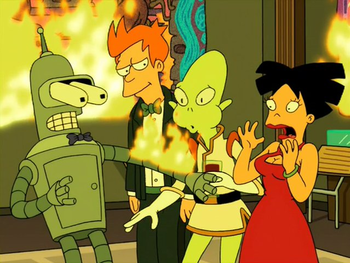 There's maiming and killing afoot. Screaming and cursing, the clattering of swords, gunfire. Faces distorted with pain and hate. It's terrifying, but it is to be expected.

But what about when you see peace in the middle of horror? One is smiling — not viciously, not insanely, not stoically — but calm, gentle... seeming almost enlightened as they slit throats left and right. They are the eye of the storm, the calm center of destruction, and their serenity is so off that it's more terrifying than any fury. Whereas many see this as a day of horrible bloodshed, this one is seemingly about as used to it as to a day of grocery shopping, and even if the chaos around them does genuinely bother them at all, chances are they will react with all the shock and terror of accidentally spilling coffee on their brand-new pants.

Villains and heroes can be dissonantly serene in battle mode, but it's rarely the main character who does that. Mysterious and frail-looking characters of whom one wouldn't expect such prowess often make it look like the easiest thing in the world to vanquish the enemy.

Another deceivingly harmless state of mind, although uncomprehending: Psychopathic Manchild, who often has a Lack of Empathy. Also likely to overlap with While Rome Burns. The Comically Serious is this trope Played for Laughs. Tranquil Fury seems similar on paper but is very different in practice. May cross over with Moment of Silence. Expect this character to be Strolling Through the Chaos while speaking in a Danger Deadpan. If the character is drowning at the time, it's Symbolic Serene Submersion. Compare Dissonant Laughter, The Slow Walk, Major Injury Underreaction, Unfazed Everyman, Conditioned to Accept Horror, But for Me, It Was Tuesday, Obviously Not Fine, and Ominous Adversarial Amusement.

The opposite of this trope is Felony Misdemeanor, which involves a character overreacting to trivial wrongs as if they were serious.

Acts like this for the entire boss fight, and is completely calm before getting decapitated. Given her theme, she's probably stoned off of her undead ass.

Acts like this for the entire boss fight, and is completely calm before getting decapitated. Given her theme, she's probably stoned off of her undead ass.