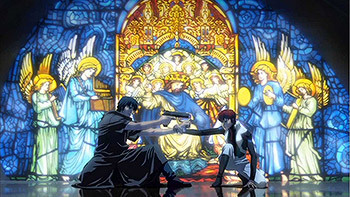 God knows why they're fighting here of all places.
"Candle-light, privacy, music! Can't think of a better place for hand-to-hand combat!"
— Phoebus, The Hunchback of Notre Dame
Advertisement:

Staging an awesome fight scene, be it a shootout or a Sword Fight, a duel or a Mêlée à Trois, in a (usually Catholic) cathedral, chapel, or church apparently has something thrilling for the directors, as does any forbidden fruit. And a shot of Jesus looking mournfully from the cross upon the bloodshed below certainly adds Faux Symbolism to it.

Also known as the Church Shootout, if it only involves gunfire and no katanas. A fight in a Creepy Cathedral may lead to this. Compare Wedding Smashers and Blood-Splattered Wedding Dress. Not to be confused with the possible aftermath of a Destination Defenestration that's Shown Their Work, though both meanings can overlap in a church setting.