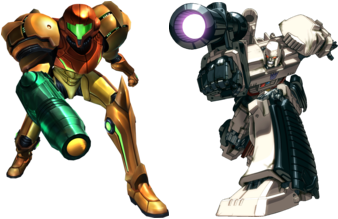 Samus and Megatron want you to have a blast.
Megatron Art

"An arm cannon sounds great until you need to button your shirt."
— Atomic Robo points out the flaws in this type of equipment
Advertisement:

A specific type of Artificial Limbs that's Exactly What It Says on the Tin: a ranged weapon integrated with a character's arm. Or their leg; we're pretty flexible here, alhough they'd have to be good at shooting while crouched, as you'd probably have to be on all fours or sitting to aim a leg-mounted weapon. And it doesn't have to be literally a cannon; a machine gun or multi-shot rifle or shotgun is also acceptable. Generally, his trope includes any ranged weapon or gun used in place of (or as) a prosthetic.

Awesome, but Impractical: First, the recoil from an actual cannon would tear the stump off, potentially killing the operator. Second, any ranged weapon (machine gun, shotgun, rifle, handgun) will have some recoil; if it's attached to the person (as a prosthetic would be) the recoil would at least mess up their aim for additional shots, and probably spin them around.

There are two general types. One is the complete replacement of a hand, or even an entire arm, with a gun. Realistically, these make very little sense, as getting an Artificial Limb would allow you to hold a gun, and do other mundane tasks with the limb when you're not in combat. Arm Cannons that fully replace the limb are also prone to suffering Fake Arm Disarms, as they can be destroyed without gravely injuring the wielder. A specialized version is a robotic hand that turns into a gun. This version often overlaps with the Hand Blast trope.

The other, more mundane version, is simply a gun that's attached to the arm — generally with the hand still intact. This might also involve Artificial Limbs, but just as often uses a special harness or weaponised vambrace. Occasionally, the weapon may fit over the forearm and hand, giving the appearance of the first kind. More discreet versions often overlap with Nothing Up My Sleeve. Aiming it is usually a simple matter of pointing in the general direction of whatever it is you want to shoot. Using your free arm to brace the cannon before firing is optional, partly because reducing weapon sway and/or recoil improves your accuracy, but mostly because it makes the resulting shot look more powerful (or at least more awesome).

Both kinds generally come with Bottomless Magazines, and are often fired by thought alone. Larger versions of both types are common on Humongous Mecha, which can be conveniently designed to carry them from the start.

At any case, some arm cannons look like trumpets by design.

For a weaponised arm that isn't a gun, see Power Fist, Rocket Punch, and especially Blade Below the Shoulder (and sometimes Pile Bunker). Not to be confused with Hand Cannon. Or, for that matter, Armed with Canon. Compare Shoulder Cannon, Leg Cannon, and Hand Blast. Finger Firearms is a small subtrope.

Olly turns his arms into cannons to shoot paper missiles at Mario.

Olly turns his arms into cannons to shoot paper missiles at Mario.