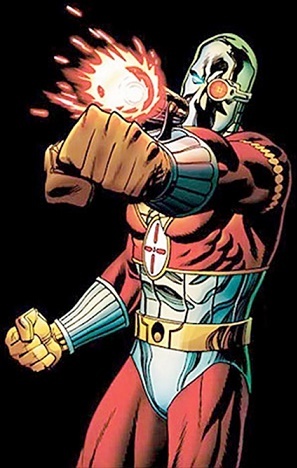 Deadshot is about to shoot you.note From three miles away. While hanging upside down. While carrying on a conversation about bullet calibers. While drunk. He's a really good shot, you see.
"Bang. You're dead."
— Justice League, "Hereafter"
Advertisement:

The man who never misses. Floyd Lawton, aka Deadshot, is a DC Comics character who started out as a member of Batman's Rogues Gallery, but is more often associated with the Suicide Squad and Secret Six.

He first appeared in Batman #59 in 1950 as a criminal who pretended to be a hero that specialized in non-lethally disarming crooks. In reality, he was eliminating the competition and trying to discredit Batman in the process. After a lengthy prison stay, he returned redesigned by Marshall Rogers as a costumed assassin with wrist-mounted guns and a grudge against Batman. In The '80s, he was one of the first recruits for the Super-Villain Suicide Squad, and stayed with the group voluntarily as one of the few members who was legitimately suicidal.

Floyd Lawton grew up with a messed-up family. His father was abusive towards his mother, who talked his older brother Ed into shooting him for her. Floyd wanted to save his brother from being a murderer, so he took a rifle up a tree and tried to shoot his father first. However, the branch he was sitting on broke, and he shot his brother instead. One way or another, he ends up in one villainous team or another, and usually acts as the marksman, due to his highly Improbable Aiming Skills.

Although a villain at times, Deadshot is portrayed as just fitting into the Anti-Hero category, as was the case with his second solo miniseries in 2005. It is established that he has a daughter, Zoe, and he attempts to clean up the neighbourhood where she and her mother lived, which was at the centre of a three-way gang war. It actually works out for a while, with Floyd living a family life. Of course, Green Arrow shows up, and tries to capture Deadshot, but not before the locals give Green Arrow a What the Hell, Hero? speech over him trying to arrest a man who was protecting them when he and the other heroes didn't. Eventually, Floyd decides to leave to protect his family, but not before making Green Arrow promise to protect the area more. From then on, Deadshot would give the money from his contracts to his family.

If there's DC media that needs a Dragon who uses a gun, or some guy with Improbable Aiming Skills, he'll likely be that character. His more notable appearances to date have been: