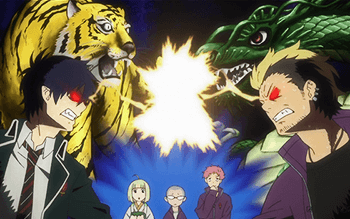 The Chinese have an interesting idiom: "the tiger and the dragon". This refers to two spirits so wildly different and yet at the same time similar, mortal enemies intricately linked together by destiny. Both the Dragon and the Tiger are symbols of Chinese Buddhism, with the tiger lunging straight ahead to bulldoze through his opponents, while the dragon is revered more for patience and wisdom from which he then derives fighting power. With neither able to conquer the other, these kingly beasts represent a balance of power, "hard" and "soft" styles coming together to form a harmony between Yin and Yang. They can also be seen as the Dragon representing Spirit/Heaven, and the Tiger representing Matter/Earth. This is why you see lots of Dragon/Tiger tattoos. They're as Eastern as Yin and Yang. Bonus points if they're in the same picture as a Yin and Yang (which isn't Buddhist, per se, but Taoist).

Whether it's just competing companies, martial arts, board games, or whatever, the dragon and the tiger will likely be used to represent these similar-but-different forces. The person representing the dragon will usually be wise, tempered, patient, humble, plucky, and/or any other traits usually seen as "laid-back". The person representing the tiger will probably be passionate, driven, enthusiastic, wild, and/or other traits seen as "Hot-Blooded". The dragon is often represented by the protagonist or by another good character if the tiger is represented by an antagonist. However, sometimes Reptiles Are Abhorrent, so reversals are not unknown, usually with a Hot-Blooded hero, and Wicked Cultured Villain with Dissonant Serenity.

Either way, once they work together or fight against each other, there will definitely be sparks flying.

Often manifests in an Animal Battle Aura. See also Red Oni, Blue Oni, for when the contrast is just contrast and not actually representing a Tiger/Dragon battle. See also Animal Jingoism, for when other animals contrast against each other. If it's just animal of the dragon by himself, then it's Dragons Up the Yin Yang. If there's also a snake/turtle and a phoenix it's The Four Gods; bonus points if the tiger is white and the dragon is blue or green without the additional two however, as they also boast clashing elements due to symbolizing opposing Chinese elements, being Metal and Wood, respectively.

This can be used either for depth, exploitation, or just because it is cool. For another example of Eastern Animal Jingoism, see Tanuki/Kitsune Contrast.