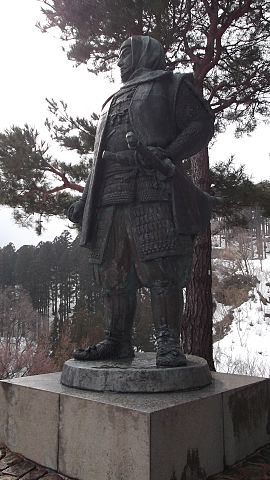 Warrior Monk Daimyo
If you're looking for that other Kenshin, you're in the wrong place.
Advertisement:

Uesugi Kenshin (February 18, 1530 – April 19, 1578) is one of the most famous Japanese daimyo in the Warring States era, reigning in prominence before Oda Nobunaga rose to power. He was a devout Buddhist, praying to Bishamonten most of the time. Combined with his prowess in the battlefield, he's also often regarded as either Bishamonten's Avatar or the God of War himself. A tamer nickname for him would be the 'Dragon of Echigo.'

Born to the Nagao family note  the family was shugo-dai, in other words Man Behind the Man to the ruling Uesugi family in Echigo in 1530, he was disliked by his father and put in a Buddhist monastery note not an unusual thing for younger sons. His father died when he was 13. Next year he changed his name to Nagao Kagetora, and his sickly older brother recalled him and gave him a castle and his own domain. The very next year there was a rebellion against his brother. The rebels attacked Kagetora's castle, thinking nothing of its young new owner, and he crushed them. He was 15 and this was the first battle he ever participated in.

He was named chief general for his brother at the age of 16. His brother was a weak and sickly ruler, and Echigo province fractured. Kagetora put down rebellions left and right. He kicked so much ass that Nagao subjects begged him to take over the clan. This he did reluctantly note after his brother forced his hand by attacking him, and even then he asked the powerless Uesugi shugo to come up with a fair solution. He was 19, and finished the reunification of Echigo province at 22.

Perhaps one of the things that made him famous was his rivalry with fellow warlord Takeda Shingen. The conflict began soon after the reunification of Echigo when refugees from North Shinano asked Kagetora to help them take back their land from Shingen. The two reputedly clashed in the very same battlefield of Kawanakajima five times... With no clear winner. A very famous, oft-re-depicted scene would be an event in the fourth battle where Kenshin managed to charge alone into Shingen's camp on his horse, ready to cut down Shingen... And Shingen grabbed a war fan and deflected most of Kenshin's attacks until he retreated. Despite this rivalry, when outside the battlefield, they were known to be friendly with each other and exchanged gifts often, and helped one another out against other warlords note This is likely to be fiction than actual historical fact. A famous anecdote is that when Shingen's other enemies cut off his salt supply note Shingen's Kai province is land-locked, and so salt had to be imported, Kenshin provided him with salt, saying, "I do not fight with salt, but with the sword." Shingen's nickname, the 'Tiger of Kai', made their rivalry Japan's Trope Codifier for Tiger Versus Dragon.

He was adopted into the Uesugi family and given the position of Kanto Kanrei for going to Kyoto to help out the Shogun and (temporarily) retaking land lost to Hojo Ujiyasu by the previous Uesugi Kanto Kanrei. He then became a monk, with Dharma name of Kenshin. Thus Uesugi Kenshin.

Once Shingen died (reportedly Kenshin wept openly at this and went into mourning for a time), along with another big rival warlord, Hojo Ujiyasu, Kenshin was free to expand his territory and make his march to the capital... And clash with good ol' Oda Nobunaga at Tedorigawa. Kenshin was utterly victorious, wiping out Nobunaga's army. It would seem that Kenshin would be the one to claim rule over the country...

Then he died midway there note It's theorized he was assassinated, but it was also pretty certain he had esophageal cancer at the time of his death so whatever killed is more of a technicality, and Nobunaga once again seized his opportunity to reach the capital. That lucky bastard.

Another wild, popular rumor is that Kenshin was actually a woman, all based on the rumor that he never married and had no children on his own, thus popularizing either androgynous depictions in other media, or flat out giving him a Gender Flip. All his children were adopted, his successor Kagekatsu (who claimed the position after emerging victorious from an infamous power struggle against his younger brother Kagetora) being the son of Kenshin's older sister. Due to clever political maneuvering, the Uesugi clan continued to exist well into the Meiji Restoration (having acquired a noble title) and even into the present day.