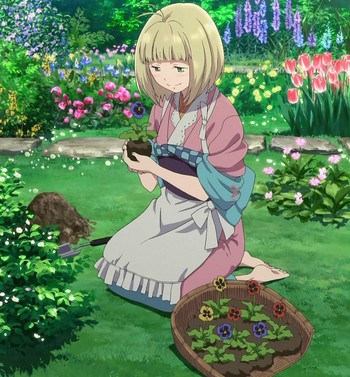 "She wants a little bit of earth
She'll plant some seeds
The seeds will grow
The flowers bloom
Their beauty just the thing she needs..."
— The Secret Garden, "A Bit of Earth"
Advertisement:

Maybe it's just a tree they've been tending to for years, a farm full of fruits and vegetables, or a flower they've just planted. Whatever the case, the Gardener is someone who grows and takes care of plants, and this often shows how much they care about living things in general.

The Gardener may be a farmer, gardener, someone doing it for a hobby, or someone simply caring enough about a certain plant in particular to want to keep it alive. May use magical/enchanted or highly advanced items for better results, although regular shovels or watering cans are more likely to be in use. Often what becomes of those who experience Call to Agriculture. A Caring Gardener cares about everything from humans to the grass beneath their feet.

Compare Green Thumb, which is about plant controlling powers, and Fertile Feet, where a person's powers cause plants to instantly grow whenever their feet touch the ground. But if they fall into a Heroic BSoD, they might end up with a Neglected Garden.

Truth in Television, especially as a hobby for the younger crowd.