Film / Dragons: A Fantasy Made Real 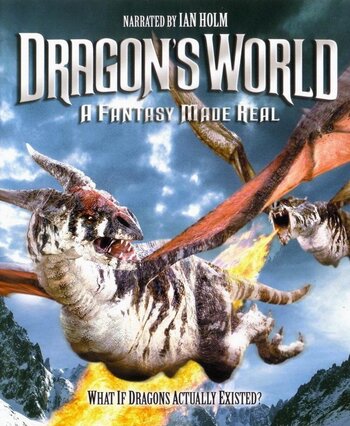 "If the legends were true, this is what we'd find."
Advertisement:

Dragons: A Fantasy Made Real (aka The Last Dragon and Dragon's World) is a 2004 British-American mockumentary describing the finding of an actual dragon carcass along with several medieval knights frozen in the mountains of Romania, its study and subsequent explanations (via CGI re-creations a la Walking with Dinosaurs) of the anatomy, ecology and evolutionary history of these mythical creatures, ending with their final extinction in the 15th century. Or did it?

Notable for leading many viewers to think that everything told in the documentary was truth, and therefore dragons actually existed. This might have been fueled by some format similarities with Impossible Pictures Walking with... series and the fact that it was aired on educational TV stations like Animal Planet and the Discovery Channel.

Dragons: A Fantasy Made Real provides examples of:

"Here you are.
Recorded in stained glass.
The devil from the mountains".
— opening lines from “Dragon Iconography”