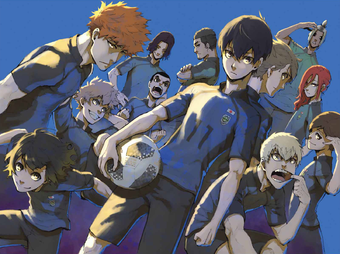 May the best striker win.
Advertisement:

In order to claim victory in the World Cup, the Japanese Football Association decides to enlist the help of an eccentric coach called Jinpachi Ego. He decides that the proper course of action is to raise an egotistical striker with unparalleled hunger for scoring goals.

His plan? Confine 300 players from all over the country into a prison-like facility called Blue Lock and pit them against each other until only the strongest one remains. Those eliminated will be banned from playing football in a professional capacity, while the sole survivor will become the national team’s striker.

Enter Yoichi Isagi, a striker who failed to bring his high school soccer team to the national tournament because he chose to pass to a teammate (who missed) instead of scoring on his own. He then receives a letter of invitation to Project Blue Lock, and he decides to join and chase after his dream of joining the national team and becoming the world’s best striker.

This unlikely blend of sports and survival game manga is penned by Maneyuki Kaneshiro (of As the Gods Will fame) and Yuusuke Nomura (Dolly Kill Kill) and began serialization in Weekly Shōnen Magazine in 2018. A TV anime adaptation has been announced for release in 2022.