Manga / Bloom Into You 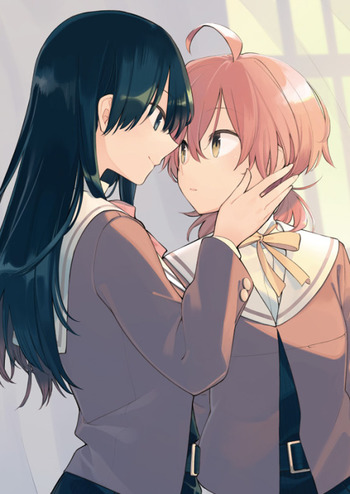 Touko (left) and Yuu (right)
The words in shoujo manga and love songs... They're always sparkling brightly. I don't need a dictionary to understand what they mean... but I've never felt them myself.
— Yuu Koito
Advertisement:

Yuu Koito has always loved shoujo manga and awaits the day she gets a Love Confession that sends her heart aflutter with bubbles and hearts, and yet when a junior high classmate confesses his feelings to her... she feels nothing. Disappointed and confused, Yuu enters high school still unsure how to respond. That's when Yuu sees the beautiful student council president Touko Nanami turn down a suitor with such maturity that she's inspired to ask her for help. But when the next person to confess to Yuu is Touko herself, has her shoujo romance finally begun? Not so simple, as while Yuu doesn't reject her senpai's feelings, she can't manage to return them...

Yagate, Kimi ni Naru (lit. "One day, I'll become you", or "I'll become yours" depending on who you ask; officially translated as Bloom Into You) is a yuri romance manga by Nio Nakatani, as well as the multimedia franchise started by its success:

A character page has been created. Please show it some love!

Bloom Into You provides examples of: