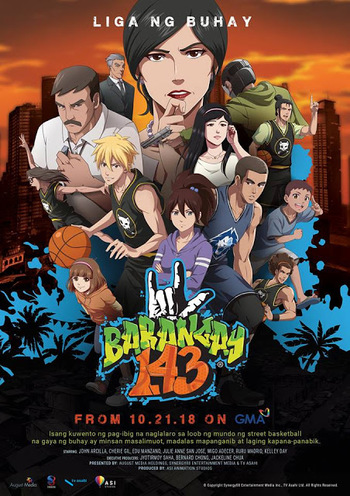 Ito ang liga ng buhay.note It's the league of life.

Plans for the anime first surfaced before 2016 and went through a bit of Development Hell before finally releasing the pilot episode on the 10 a.m. Sunday slot on 21 October 2018, and interest in and support for it was drummed up by a continual teasing presence on social media and the release of a mobile game named Barangay 143: Street League. There were even mini-manga webcomics centring on Wax Rivera, one of the players.

The anime centres around that most Filipino of obsessions—street basketball—and follows a ragtag underdog street-ball team, the Puzakals that hail from the titular Barangaynote Barangay is the rough Filipino term for "neighbourhood" or "village". 143, a poor neighbourhood in the City of Manila. As the series opens, they've been losing badly, but that's nothing compared to the personal tragedy they're going through: Baste, the captain of the Puzakals and the son of Coach B, was brutally shot dead by gunmen on a motorbike—leaving Coach and his daughter Vicky to fill in the gaping hole both in the team and in their lives. Meanwhile, over in South Korea, Bren T. Park grapples with family duties even as he makes captain of his own basketball team, but tragedy claims his family as well and eventually drives him to find his true parentage in the Philippines (it's that kind of show, and he's only half-Korean), where events will put him on a collision course with—who else—that ragtag team angling to bring glory to their hometown, Barangay 143.