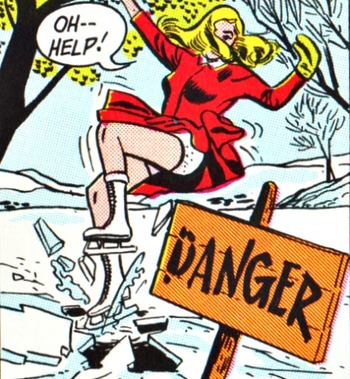 That sign is there for a reason!
"Any fool does not believe in signs; he's such a goon! He may start out ice skating, but he's drowning pretty soon!"
—Jiminy Cricket, I'm No Fool Having Fun
Advertisement:

Rule of thumb: if the narrative in any action, mystery, or genre work draws attention to the fact that the ice over a body of water has just formed, chances are good someone will fall through that ice before the story is over. Ice-cold water being what it is, there's a fifty-fifty chance that character will then drown or freeze. If there's a close-up of an actual warning sign, it is in fact almost an unspoken guarantee that someone will ignore it.

Possible variations include being unable to get a solid grip on the surface ice or getting turned around underwater, creating a kind of natural Drowning Pit. Even if the victim does manage to break through to the surface, or if they're pulled out and rescued, there's still a strong possibility they may succumb to hypothermia, pneumonia, or otherwise catch their death of cold.

People rarely walk on ice by choice, thin or otherwise, unless there's no alternative — the bridge is out, or they're being pursued. While occasionally a character in fiction will stumble out onto snow-covered ice without realizing it, it's far more common for them to know exactly the risk they're taking, so that their death or misadventure is partly on their own heads: it may be An Aesop about how they were too stubborn or headstrong, possibly someone who pushed their luck too far too often, or maybe they were just too much of a Cloudcuckoolander to really appreciate the danger.

In lighter works a character skating on thin ice is a common sight gag. In this case, expect Harmless Freezing to be in full effect, and in a cartoon, the character may immediately bob out of the hole as an instant ice cube.

A subtrope of Chekhov's Gun. Often the outcome of going over an Inevitable Waterfall in winter. Compare A Crack in the Ice, where a character falls through ice or snow into a crevasse. See also Failures on Ice. Contrast Frigid Water Is Harmless, where falling into near-freezing water is no big deal at all.

As this can be a Death Trope, all spoilers are unmarked. Proceed at your own risk.

Madeleine Swann makes her escape from a gunman through an icy floor, which inevitably fails.

Madeleine Swann makes her escape from a gunman through an icy floor, which inevitably fails.