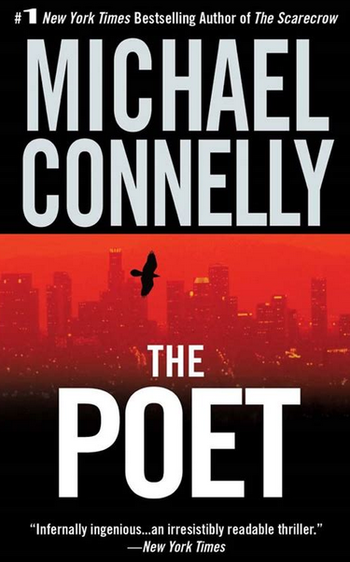 The Poet is a 1996 mystery novel by Michael Connelly.
Advertisement:

It was Connelly's fifth novel and the first that didn't feature his most frequent protagonist, LAPD detective Harry Bosch. Instead, the main character is Jack McEvoy, a newspaper reporter who specializes in the crime beat and, specifically, murder. His world is rocked when his twin brother Sean, a homicide cop, kills himself by a bullet to the head.

Jack resolves to write about his brother's death. He is skeptical of the suicide theory and eventually discovers that sure enough, Sean's death was a carefully planned murder. It turns out that there is a serial killer going around the country targeting homicide cops. The killer makes a habit of quoting Edgar Allan Poe works, which earns him the nickname of "The Poet". The FBI takes over the investigation, and brings Jack along, which leads to romance when Jack meets attractive FBI agent Rachel Walling.

A parallel story follows William Gladden, a murderous pedophile who makes his living selling child pornography on the dark Internet. The two stories converge when the FBI zeroes in on Gladden as the killer and sets up a trap.

Eight years later Connelly returned to the Poet story in a sequel, The Narrows. Connelly would later write another Jack McEvoy novel, The Scarecrow, and still later a third McEvoy novel, Fair Warning.