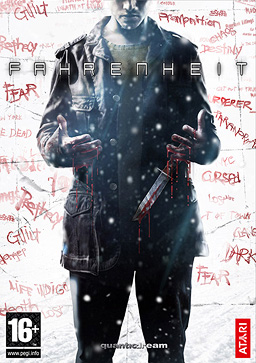 "Things are never quite what they seem. We think we understand the world around us, but we really only see the outside, what it seems to be. My name is Lucas Kane. My story is the one where an ordinary guy has something extraordinary happen to him. Maybe it was supposed to happen, maybe it was my destiny, or my karma or whatever. I know one thing for sure: Nothing's ever going to be the same again."
Advertisement:

Lucas Kane is an ordinary New York City IT administrator until he murders a total stranger in a possessed trance and flees the crime scene. From there on, he becomes a fugitive from the law, relentlessly chased by police officers Carla Valenti and Tyler Miles. But those two become the least of his concerns when he unexpectedly gains superpowers and becomes the target of an Ancient Conspiracy that initially manipulated him into committing murder in the first place... And that all happens on the backdrop of global cooling around ten degrees Celsius every day.

Fahrenheit is a highly cinematic Action-Adventure game developed by Quantic Dream and written by David Cage in 2005. It was redubbed to Indigo Prophecy for American release to avoid confusion with Michael Moore's Fahrenheit 9/11. A later US re-release under the Fahrenheit name popped up, containing scenes cut from IP that were present in the European version of the game and an appropriately higher age rating. The game was re-released again on computers and iOS with improved textures and full controller support under the combined name Fahrenheit: Indigo Prophecy Remastered in late January 2015, again uncut and uncensored.

One of the most prominent gameplay features of the game was so-called "physical challenges", which required the player to press several buttons in close succession or just hit left and right very, very fast. These were used to lend a sense of physical urgency to the game's more fast-paced scenes.

There is also a Spiritual Successor. See Heavy Rain.

Not to be confused with Fahrenheit 451.