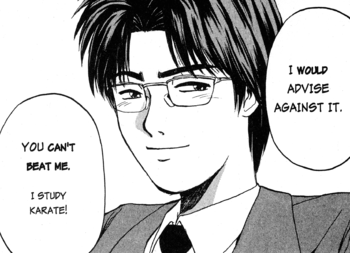 Better not try it.
"It's likely that no amount of practice will allow you to hurl fireballs just by crouching, moving towards someone and then punching the air. Still, if you do run across an opponent who's dressed in a gi (with sleeves that appear to have been ripped off in savage fury), it's probably best to steer clear of them."
— Cracked, 5 Movie Fighting Styles Too Awesome to Actually Exist

A scene in which a martial artist warns an antagonist that he knows martial arts before kicking the guy's ass. Bonus points for the martial artist assuming an outlandish Ass Kicking Pose beforehand. The antagonist will always laugh off the warnings and be defeated in humiliating fashion. If the martial artist's skills turn out not to be effective, it's probably an example of I Know Kung-Faux. These scenes were popular when martial arts films started getting attention in the west. The martial artist will almost always study an Asian style, but the trope can still hold true with any named system of self-defence.

This trope is the inversion of Good Old Fisticuffs, in which an Arrogant Kung-Fu Guy gets defeated by plain, no-nonsense asskicking (for bonus points, this happens before he's finished boasting).

It's pretty much a Dead Horse Trope now that Asian martial arts films and choreography have reached a saturation point in western culture. Ironically, the trope might have come full circle due to the rising popularity of Mixed Martial Arts over most classic Asian martial arts styles.

You might be looking for Suddenly Always Knew That, which used to be called "I Know Kung Fu", or the Useful Notes article about Karate. There's also I Know Mortal Kombat, where a person learns Martial Arts (or some other skill) by watching movies or playing video games.