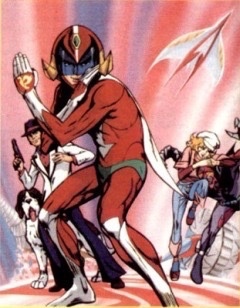 Hurricane Polymar (破裏拳ポリマー Hariken Porimā?) is an anime produced by Tatsunoko Production. The show was created by Tatsuo Yoshida, who had produced many of Tatsunoko's series. Hurricane Polymar is the secret identity of Takeshi Yoroi (鎧武士 Yoroi Takeshi?). He wears a special suit which enables him to fight crime. The suit is made of memory plastic which enables him to assume any shape, including morphing its wearer in 5 different vehicles.

A two part anime OVA was created in the mid-90's entitled Hurricane Polymar: Holy Blood featuring extremists that mutate into amphibious shark-like creatures. Urban Vision initially released it on VHS in the late 1990s, but since then the U.S. DVD rights have gone to Discotek Media.

Polymar was also one of the characters to appear in the fighting game Tatsunoko vs. Capcom. The Toku live-action film adaptation was released in 2017.