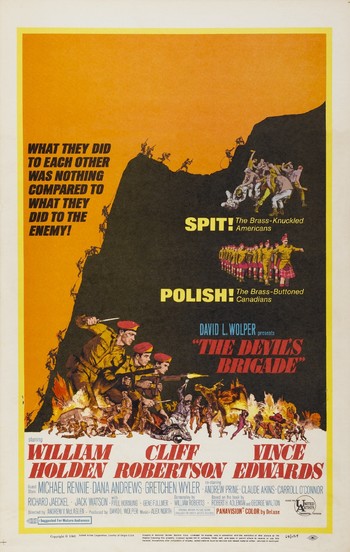 The year is 1942. Lt. Col. Robert T. Frederick (Holden) is called to answer to Lord Mountbatten for his rejection of a planned American-British commando raid into occupied Norway. Seeing his willingness to call out the plan's flaws as a sign of worth, the British decide that Frederick is precisely the man they need to lead the new joint American-Canadian unit, the First Special Service Force. Frederick is tasked with combining the rough and rowdy Americans with the prim and proper Canadians.

Released a year after the better-known The Dirty Dozen, The Devil's Brigade is loosely based on the real exploits of the 1st Special Service Force.

Example of:
Slobs Versus Snobs