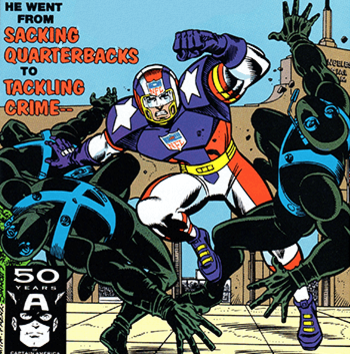 Often seen in fighting games, this trope is about characters whose fighting styles either use tactics from or are based on non-combat sports. This does not include those who just use sporting equipment as bludgeoning weapons (for instance, Batter Up! and Golf Clubbing). It comes as no surprise that many of these characters are athletes.

Part of the trope name comes from former football player, coach, and commentator John Madden, who has a line of successful football video games.

Sub-Trope of Weapons of Their Trade and Martial Arts and Crafts. This is the inverse of Martial Arts for Mundane Purposes, as well as Improbable Sports Skills. May result in Gretzky Has the Ball or Artistic License – Sports. If the sport is gymnastics or cheerleading, see She-Fu. See also I Know Mortal Kombat, Dance Battler, Wrestler in All of Us, where the fighting style is based on Professional Wrestling and Boxing Battler, a variation on this trope using an actual combat sport.