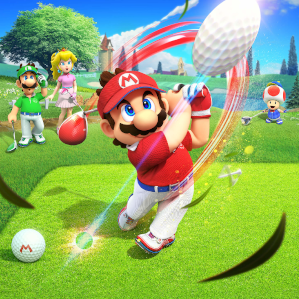 Time to hit some balls rather than bricks for a change!
"Welcome to Mario Golf!"note Wario: Should've been called Wario Golf. Still, you gonna love it!
Advertisement:

A series of sports games by Nintendo and Camelot Software Planning starring Mario, Luigi, and the rest of the Mushroom Kingdom gang.

Camelot also developed the golf portion of Mario Sports Superstars. Another golf-related Mario game was NES Open Tournament Golf (developed by Nintendo R&D2), known as Mario Open Golf in Japanese, released for the Nintendo Entertainment System. We Love Golf!, another golf game made by Camelot and published by Capcom, was more or less Mario Golf without Mario. The first Hot Shots Golf was also made by Camelot, but for Nintendo's rival Sony. As such, Mario Golf gets some of its DNA from it. During the weekend of July 9th, 2021, Tetris 99 celebrated the release of Super Rush with a limited time theme.

At one time, Nintendo of America considered the player character of the original 1984 NES Golf and its 1989 Game Boy port to be Mario, which is reflected in official publications such as Mario Mania and even the Western box art of the latter game. However, Nintendo eventually confirmed in Captain Rainbow is that the character is actually Ossan, an obvious Mario Expy whose name is a reference to one of the names Mario was given during the development of Donkey Kong.

Example of:
Corner of Woe