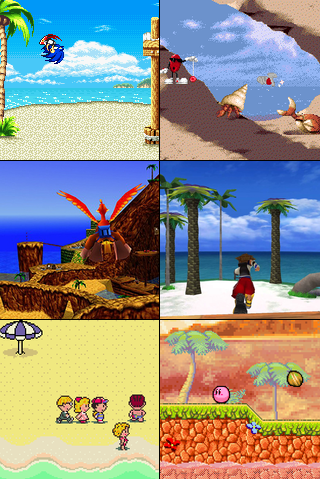 These levels are not entirely Under the Sea, but feature the edge of land and water. This can be an easy, fun and relaxing level in the style of a Beach Episode, but not always, since the beach can be dramatic. Expect palm trees, sand, fun Caribbean-style music and jetskis. Be wary of Stalactite Spite from falling coconuts, and possibly the occasional Threatening Shark and Giant Enemy Crab. May overlap with Gangplank Galleon and/or Under the Sea, or located near a Port Town.

Compare the just-as-tranquil Green Hill Zone, which is more grassland or inland than Palmtree Panic and will usually be one of the starting levels. There is considerable overlap between the two.

A beach level with palmtrees and sand.

A beach level with palmtrees and sand.