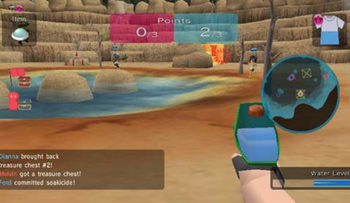 The deathmatch FPS for the whole family!—But in all seriousness, Water Warfare is a game based on the old-fashioned sport of running around a playground with a squirt gun and water balloons trying to make everyone else get really, really wet. Which, as it just so happens, does translate well to the FPS deathmatch format. Whodathunkit?
Advertisement:

This 2009 WiiWare game was made by Hudson Soft—notably, it's a rarity for Japanese developers to make First-Person Shooter games. Despite coming from the WiiWare service, this game is noted for being relatively deep: It has four different maps (eight, if you count the large and small versions of each area), six different match styles, eight different guns, a host of different items, open online play, and even a small character creation system. There's even several single-player missions for the lonely water fighter.