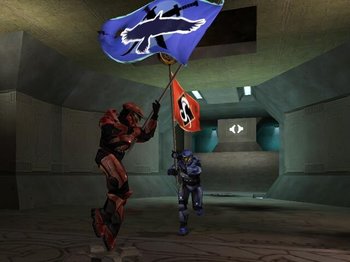 Red Grunt #1: Everyone, everyone! Look unto me! I possess the blue flag!
Red Grunt #2: It's more beautiful than I ever imagined!
— Red vs. Blue
Advertisement:

Capture the Flag (CTF for short) is a game played by two or more sides, each of which is trying to capture the other's flag and return it to their base. The first side that accomplishes this a certain number of times, or scores the most captures within a designated period of time, wins. Variations include requiring that your flag be in your base before you can capture the enemy's, having a single flag that can only be captured by one team at a time, having multiple "bases" that must themselves be captured, and/or allowing players to be captured (or killed) as well as the flag.

As a game mode, this is found in nearly every First-Person Shooter with multiplayer capabilities, many Real-Time Strategy games, and even some MMORPGs. The objective being fought over isn't always a flag, but can be any object that can be picked up and moved by players. If the developers in an FPS or RTS game don't include a Capture the Flag mode, you can bet that the community will quickly whip one up via Game Mods. In fact, this is how CTF was first introduced to video games.

The flag generally has no capabilities of its own; it's not a weapon and brings no particular advantages to the team that holds it. In fact, many games will restrict the movement of the flag carrier, make him highly visible, make him unable to use a weapon while holding the flag, and/or increase the damage he takes, to encourage pursuit and discourage "keep away" tactics in which the carrier simply hides with the flag in order to deny victory to the enemy. In some games, the latter is even considered a form of Griefing.

If the "flag" moves on its own and one side is protecting it, that's an Escort Mission. When the flag brings instant victory to the team that captures it, it's a Golden Snitch.