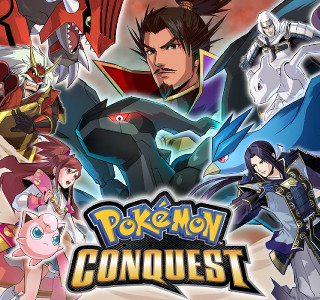 Announced in December 2011, released on March 17th, 2012 in Japan, June 18th, 2012 in North America, June 21st, 2012 in Australia and July 27th, 2012 in Europe, franchise giant Pokémon crosses over with, of all things, Koei Tecmo's Nobunaga's Ambition, a real-time strategy series known to Japan more than America—and yet, it still got a release there.

The game is set in the fictional region of Ransei, where warriors fight alongside Pokémon. You play as a young person who befriends an Eevee and has recently become the Warlord (leader) of a kingdom named Aurora. Legend states that they who conquers all of Ransei will unleash the Legendary Pokemon that created it. You must race to conquer all the other kingdoms before a Warlord named Nobunaga can, or else he will destroy the region. After completing the main story you further unlock bonus side-stories where the supporting Warlords each get their turn as the protagonist of their own focused tale with varying plots, such as a competition between the ninja Warlords, a beauty contest between the female Warlords, or trying to conquer enemy nations and/or recruit a large army to prove their worth to doubting enemies.

As with Nobunaga's Ambition, the game is a Strategy RPG. You command an army of Warriors and higher-ranking Warlords to move about the world map invading enemy nations and conscripting defeated Warriors and Warlords to serve you. When you're not attacking enemies you can stay at home upgrading nation facilities for better efficiency, making and spending money at shops, and of course, going into the field to draft wandering Warriors and catch new Pokémon. In Ransei, no one uses Pokéballs; instead Warriors have the ability to form empathic links with Pokémon, convincing them to come along with you on their own will. While gameplay otherwise works out to your standard Strategy RPG, it is supplemented with the typical Pokémon concepts of evolution, type advantages, and innate Pokémon abilities.

There is a six-chapter manga adaptation named Pokémon + Nobunaga's Ambition: Ranse Picture Scroll that began on March 16, 2012 and is hosted on Niconico Seiga