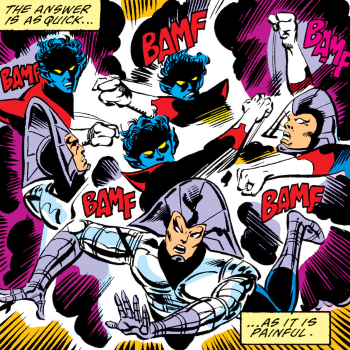 Nightcrawler is a *BAMF* master.
"Does he have ATD, Attention Teleportation Disorder?"
— The Nostalgia Critic on Ganon from the Zelda TV show
Advertisement:

A character with the power of Teleportation milks it for all it's worth, and, in a fight, uses their power to constantly disappear and appear at will, hitting, running, and flanking without any effort at all and barely any threat of counterattack.

Usually, a character like this is defeated in one of three ways. Disable their teleportation ability, trick them into trapping themselves, give them a well-placed Offhand Backhand just as they come out of their teleport, or any of the countermeasures of Teleport Interdiction.

A common tactic of video game bosses, and ones that use this are likely to be That One Boss. Very likely to cause a Snap to the Side. Inertia Is a Cruel Mistress could put a stop to it.

Sometimes only antagonists can do this, largely because of Villain Teleportation. If made possible by Faster-Than-Light Travel and performed only once or twice, it is a Hyperspeed Ambush. If a character teleports over and over, not to fight someone but to travel long distances, they're probably a Multistage Teleport.

Compare Speed Blitz, a similar effect that is achieved by spamming Flash Step, and thus a form of Super Speed rather than actual teleportation.

With Shadow Weaver's help, Glimmer is able to use her teleportation powers to a degree not previously possible, allowing her to evade Catra during a fight.

With Shadow Weaver's help, Glimmer is able to use her teleportation powers to a degree not previously possible, allowing her to evade Catra during a fight.