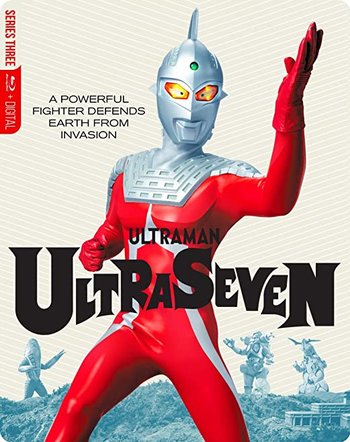 Far among the galaxy is where your home lies. Ultraseven, fighter Seven. Ultraseven, Seven Seven. March to the end of the big Milky Way. With the Ultra Eye, SPARK!
Seven! Seven! Seven!
Advertisement:

Ultraseven (sometimes Ultra Seven or Ultra-7), the third entry in the Ultra Series, is more serious, had very sophisticated writing and plotting, and its style is purely Science Fiction, as opposed to its kid-friendlier predecessor. Ultra Seven is an iconic character, in fact so successful that he (and actor Kouji Moritsugu, who played Dan Moroboshi) has appeared in many subsequent shows and movies, even starring in Ultraman Leo seven (no pun intended) years later. Decades later, Seven receives a Spin-Offspring, Ultraman Zero.

Stationary Post Observer (or Agent) #340 from the M78 Nebula was surveying the Milky Way one time. He flew down to planet Earth when he saw a selfless mountain climber named Jiro Satsuma do a Heroic Sacrifice to save his friend on a mountain climbing journey (Think the movie Vertical Limit). Agent 340 rescued Satsuma in the nick of time, and was so moved by the man's courage that he decided to stay on our planet and patterned his human identity on Satsuma's, going by the name Dan Moroboshi. People would come to know him as Ultra Seven, champion of Earth against alien attacks.

The show received an American dub, a co-production of Turner Program Servicesnote the syndication arm of Turner Broadcasting, which also distributed Starcade, The Wonder Years and (post-1991) Hanna-Barbera series; it was eventually absorbed into Telepictures Distribution in 1996 and in turn into Warner Bros. Television Distribution in 2003 and Canadian studio Cinarnote rebranded as Cookie Jar Entertainment in 2004 following a brief shutdown; acquired by DHX Media in 2012 in 1985; however, for various reasons, the episodes weren't shown until the mid-90s, when TNT dusted them off.