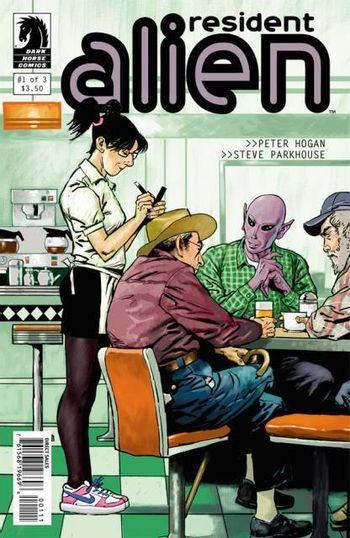 There is 1 Impostor among us.
"Hello, friends! I am a perfectly normal human worm baby. You have nothing, absolutely nothing, to fear from me. Just pay no attention to me and we'll all get along just fine."
— Zim the Alien, Invader Zim
Advertisement:

A being from outer space generally comes to Earth either to observe and learn about us or to help guide us (or just get stuck here) and must keep his true nature a secret. A good opportunity for Mr. Exposition to make his presence felt as the alien often needs everything explained, or describes the situation for others of his kind who might share his curiosity. A lot of comedy can be drawn from the newly landed alien having No Social Skills.

Alternatively, the alien or aliens could be stranded and unable to leave. If they want to return home, they'll never get to, making Earth their Gilligan's Island. Often, the alien will eventually lose interest in leaving, and if given the opportunity will refuse it. This is usually the case when they form strong attachments and relationships to Earthlings, such as becoming friends with a human roommate.

Tends to grow less and less plausible the longer a series lasts, as evidenced by the difficulty many viewers had with the idea that the 3rd Rock from the Sun aliens would not know about taxes after four years in the United States.

If the main character is from our world (or one close to it) and the setting is another, that's Trapped in Another World. A whole community of Aliens Among Us, living here for a while, will probably form a Wainscot Society.

Not to be confused with the aptly named Among Us.

Alternative Title(s): Aliens Among Us