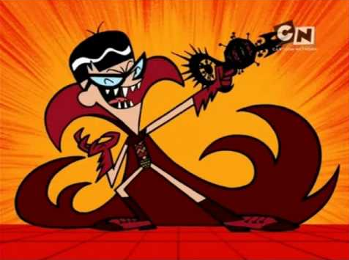 The common nerd is, at worst, a bit annoying. Sure, he might have No Social Skills and be overly fond of telling people about his Pokémon collection, but his heart is generally in the right place.

And then there's this guy (though definitely not always a guy). Either his lack of social niceties is caused by a complete disregard for other people, or else the loneliness and rejection they've led to has turned him bitter and twisted. Either way, he's out to get everything he's ever wanted, by any means necessary, including revenge on any real and imagined slight he's suffered.

He's often an Entitled Bastard who thinks that his superior intelligence ( which may or may not actually exist) should automatically make him adored and successful, and that the people failing to give him his due deserve some sort of exaggerated punishment for it. He has often genuinely been bullied and hard done by, but by the time he gets to his Motive Rant he's always done so many horrible things that the protagonists will be less than sympathetic - no matter how many lockers you were stuffed into, it just doesn't justify sending demons to rip the living souls of people out of their bodies.

The Nerdy Bully and Insufferable Genius are this trope's somewhat more benign cousins, who settle for being Jerkasses instead of going straight for the outright villainy note and are usually more impressive than him besides - the Evil Nerd may think he's a genius, but he usually isn't, and he tends to be too afraid of direct confrontation to become a successfully bully. On the flip side, the Evil Genius and Mad Scientist is what the Evil Nerd often wants to be but can't quite live up to - while he may or may not be smart, he's fundamentally too small and dull a person to conceive of a genuinely visionary plan, evil or otherwise.

Since the Evil Nerd is generally not the fittest or best-looking, there is likely to be overlap with Brains Evil, Brawn Good and Beauty Equals Goodness as he faces off against the better-groomed and more physically capable heroes. Compare the Evil Cripple, whose broken morality is also symbolised and/or caused by a more visible handicap, as well as Nerdy Bully, which he may overlap with or have graduated from if he's past his high school years.

Contrast Nerd in Evil's Helmet, where the villain's nerdiness offsets his evil instead of being the foundation of it.

No Real Life Examples, Please! We all know that nerds in Real Life are not always nice.