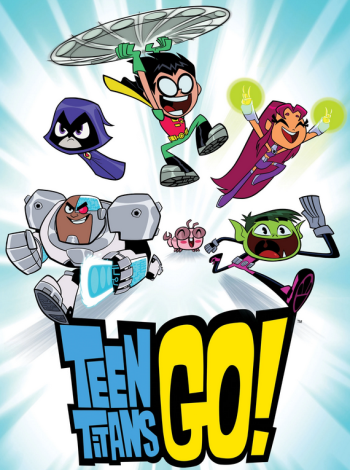 Titans, GO! note Clockwise from top: Robin, Starfire, Beast Boy, Silkie, Cyborg, and Raven.
They're the Teen Titans! They're back ...somewhat! And they're totally going to save the world! ...Or something!
— Original tagline
Advertisement:

Teen Titans Go! is a Cartoon Network animated television series based on the DC Comics series, Teen Titans. More specifically, it is a quasi-Spin-Off of the previous 2003 Teen Titans series, though it takes more direct inspiration from the New Teen Titans shorts that were also based on that incarnation. The main cast, as well as most of the supporting cast, reprise their respective roles from both productions.

In contrast to its animesque action/adventure predecessor, Teen Titans Go! is a Denser and Wackier Gag Series revolving around the titular superhero team and their comedic misadventures as they mill about Jump City or hang out around Titans Tower. Oh, and fight crime if they ever feel like it. Whereas the 2003 Titans were heroes regularly looking to do good and help those in need, the Go! Titans are portrayed more like a self-absorbed group of teenagers who are often mocked by both villains and fellow heroes alike for their tendency to goof-off rather than fight crime. Think of it as being in the vein of Rock Lee's Springtime of Youth or RWBY Chibi, where the idea is to take established characters and put them in increasingly outlandish situations that wouldn't be possible in their more serious, plot-driven forms. Be prepared for large doses of Comedic Sociopathy and Self-Deprecation.

The series premiered on April 23, 2013 alongside Beware the Batman, replacing Young Justice and Green Lantern: The Animated Series on Cartoon Network's DC Nation block, though it proved successful enough to receive a primetime slot in addition to its Saturday morning one. Following DC Nation's cancellation note though by that point, Beware the Batman was cancelled, with Teen Titans Go! being the sole show running on the block, Teen Titans Go! was integrated into the regular Cartoon Network lineup. At which point it became the most popular series on the network, leading to it being one of the most infamous examples of adored by the network for the animation station. In early 2021, it was announced the series would be getting it's own spinoff, The Night Begins to Shine, based off of the episode "40% 40% 20%", and its' subsequent two-sequel miniseries. The series has its own host of tie in media including:

Mean What You Say

Mean What You Say