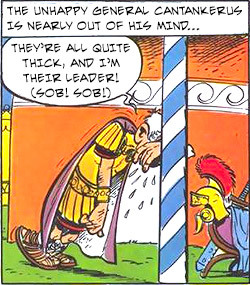 "Fuck... ALL Y'ALL! Do you have any idea what it's been like trying to lead you people!? You ignore all of my strategies, you adamantly refuse to work together, and then you blame me FOR ALL OF YOUR PROBLEMS!"
— Heathcliff, Sword Art Online Abridged
Advertisement:

Life is tough for the Beleaguered Assistant. But if there's one thing worse than working for incompetent, sociopathic or outright evil characters, it's being in charge of them.

The Beleaguered Boss would really prefer if their employees had more than a few brain cells to rub together. Instead, they have to put up with lazy oafs, reckless fools, and/or just plain stupid people that, at best, slow things down, or at worst put the entire operation in jeopardy. It's akin to trying to herd cats. Expect said boss to do a Face Palm of frustration, say "I Need a Freaking Drink", explode upon hitting their Rage-Breaking Point, or similar.

Reasons for not quitting the job vary. Maybe the boss fears getting into a worse situation than this. Maybe they actually keep the crazy/lazy/stupid employees safe just by being present. Maybe the employees are actually really bad replacements and boss has to scramble to keep business running while being hamstrung by the bad replacements. Whatever the reason, expect a lot of complaining and feeling like the Only Sane Man among lunatics.

Subtrope of The Alleged Boss. See also Surrounded by Idiots, We ARE Struggling Together and Only Sane Employee. Enraged by Idiocy may ensue.

Compare Authority in Name Only, the Nerd Nanny and the Cloudcuckoolander's Minder. Often overlaps with Da Chief (especially when the Cowboy Cop and Mayor Pain are involved), Mildly Military, The Chains of Commanding or Military Maverick.