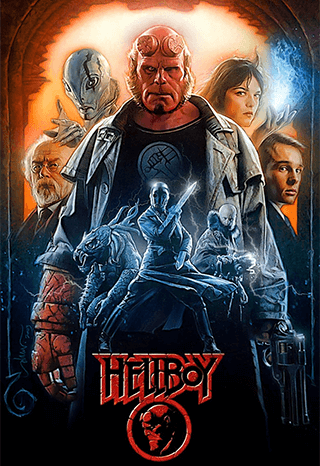 "As you entered the lobby, there was an inscription: 'In the absence of light, darkness prevails.' There are things that go bump in the night, Agent Myers. Make no mistake about that. And we are the ones who bump back."
— Professor Trevor Bruttenholm
Advertisement:

In the final days of World War II, the Nazis and Grigori Rasputin open a portal to the Void, attempting to summon the Ogdru Jahad to destroy the world. Allied soldiers, with the help of occult expert Trevor Bruttenholm, destroy the portal, but not before something comes through: a baby demon. Bruttenholm adopts him and the soldiers of the unit name him "Hellboy."

Sixty years later, Hellboy is one of the best agents in the US government's top-secret Bureau of Paranormal Research and Defense, alongside Abe Sapien (a fish-man with Psychic Powers) and Liz Sherman (a pyrokinetic who vacillates between wanting to be on the B.P.R.D. and wanting to be a normal human). They're joined by Naïve Newcomer FBI agent John Myers, who was chosen specifically by Professor Bruttenholm to provide the moral support for Hellboy to become a man.

And Hellboy will need all the support he can get: Rasputin has been resurrected by his lover Ilsa Haupstein and his personal assassin Karl Ruprecht Kroenen. The villainous trio frees the hellhound Sammael, as the first step in a plan to force Hellboy to fulfill his destiny and destroy the world.

A sequel was released in 2008, titled Hellboy II: The Golden Army. Two Animated Adaptations produced by del Toro and featuring the same cast were released in 2006 and 2007: Hellboy: Sword of Storms and Hellboy: Blood & Iron. A third film was planned but ultimately canceled, and the series was rebooted with Hellboy (2019).

A race of powerful, unknowable entities from the dawn of time, the fabled Seven Gods of Chaos are imprisoned within a vast crystal cocoon floating somewhere in deep space, waiting to be released and bring about the apocalypse.

A race of powerful, unknowable entities from the dawn of time, the fabled Seven Gods of Chaos are imprisoned within a vast crystal cocoon floating somewhere in deep space, waiting to be released and bring about the apocalypse.