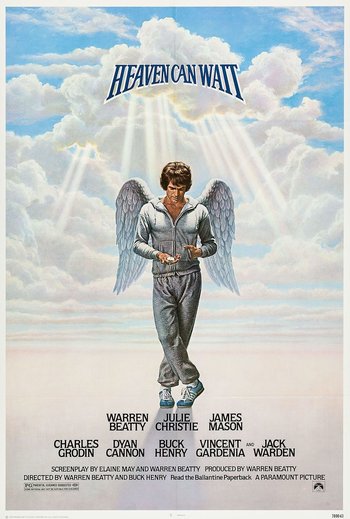 Heaven Can Wait is a 1978 comedy-fantasy film directed by Warren Beatty and Buck Henry, both of whom also star in it along with James Mason, Julie Christie, Jack Warden, Charles Grodin, Vincent Gardenia, and Dyan Cannon.

The screenplay (written by Beatty, Elaine May, and an uncredited Robert Towne) was adapted from the 1938 stage play of the same name by Harry Segall, which had previously been filmed in 1941 as Here Comes Mr. Jordan, and would be remade again in 2001 as Down to Earth.

The story follows Joe Pendleton (Beatty), a backup quarterback for the Los Angeles Rams, who is looking forward to leading his team to the Super Bowl when he is involved in a terrible collision with a truck. A guardian angel on his first assignment (Henry) plucks Joe out of his body early in the mistaken belief that his death is imminent, and Pendleton arrives in the afterlife. It is then decided that Pendleton was taken too soon, but as it is too late to return him to his former body—which has already been cremated—he is given a second chance as a millionaire who had been drowned by his lover and secretary. The film follows him taking this opportunity to live the life he missed out on.

Heaven Can Wait earned nine Academy Award nominations, winning for Best Art Direction. Beatty and Cannon won Golden Globes for their performances, as did the film for Best Picture-Comedy or Musical. As noted above, it's a remake of Here Comes Mr. Jordan, and thus has no connection with the 1943 Ernst Lubitsch movie Heaven Can Wait.