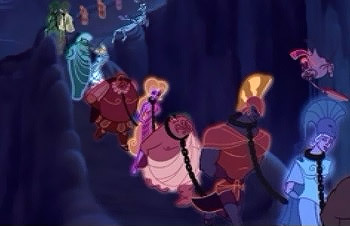 So you've just captured a wizard, a fairy, a spirit, a ghost, maybe Superman or even a god. Congratulations! Now how do you keep them from escaping? Ordinary rope or handcuffs won't do the trick, they could just use magic to make them come undone or maybe just break them or pass right through them. What you need are special restraints that are either so strong nothing short of the universe collapsing can break them, or the restraints somehow counteract the prisoners' powers, rendering them harmless as long as they're bound by the restraints.

This trope covers ropes, chains, handcuffs, shackles, straitjackets, and other things along those lines which are capable of holding these extraordinary beings without them being able to get out of them.

Most likely some form of Applied Phlebotinum, probably as a Power Nullifier, and chances are you'll find something like this in a Tailor-Made Prison or Extranormal Prison, but may just as well be used outside them.

Anything that does not actually restrain the limbs in some way is Not This Trope. Bracelets, anklets, necklaces or anything else that simply limits or removes their abilities is a Power Nullifier.