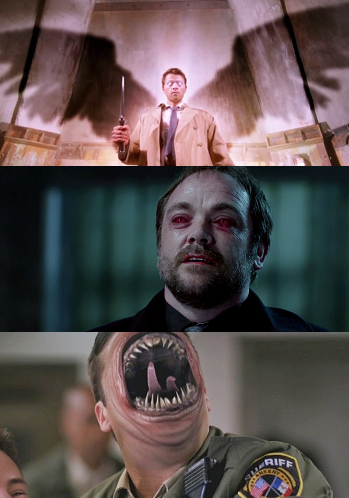 The good, the bad and the Aargh!
"On the front of the Octavo had been a representation of Bel-Shamharoth. He was not Evil, for even Evil has a certain vitality — Bel-Shamharoth was the flip side of the coin of which Good and Evil are but one side."
— The Colour of Magic
Advertisement:

A lot of contemporary horror fiction uses a strange blend of Abrahamic (especially Christian) and Lovecraftian mythology. Angels are good, usually, but not necessarily nice; Devils are bad, usually, and still evil even when they are nice; Eldritch Abominations from Beyond either A) just want to destroy it all, B) twist everything into something wholly alien that squicks out both of the aforementioned parties, or C) operate on Blue-and-Orange Morality.

From a story perspective, it makes sense. You see it a lot in stories where God and Satan Are Both Jerks. The angels serve as foils for the hero, allowing him to show off his rule-breaking attitude. The devils prove the hero's toughness and cleverness by giving him someone to beat. And the outsiders serve as the villains of the story. Also may be a consequence of an All Myths Are True system, with angels, devils, Eldritch Abominations, The Fair Folk and the three Billy Goats Gruff all fighting with or over the main characters. Alternatively, you may have a situation of the Eldritch Abominations and either of the other two being on the same side, vying against the third and whatever's left of humanity in the wake of the subsequent Armageddon.

From a theological perspective, it's a bit muddled. (Oftentimes you can end up with situations where the angels and/or demons ARE squid. Those go here too.) It can result in The Good, the Bad, and the Evil—angels, demons, and Eldritch Abominations, respectively. If the angels are rarely seen expect Evil Versus Oblivion (devils and squid, respectively). If God and Satan Are Both Jerks and the squid match the usual reputation, you've got yourself a thoroughly Crapsack World. If the setting doesn't limit itself to just the Abrahamic and Lovecraftian pantheons, then you've got a full-fledged Fantasy Kitchen Sink on your hands. The Lovecraftian monstrosities may not actually be squidlike; that's just a stereotype.

Bahamut is an inter-dimensional draconic entity so powerful and destructive that it forced the gods and demons to ally against it. It is incapable of being permanently killed due to its existence transcending time and space, and if it is slain it will eventually be reborn.

Bahamut is an inter-dimensional draconic entity so powerful and destructive that it forced the gods and demons to ally against it. It is incapable of being permanently killed due to its existence transcending time and space, and if it is slain it will eventually be reborn.