Literature / The United States of Monsters 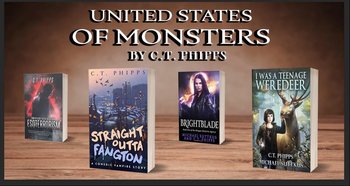 The monsters are voters now.
Advertisement:

The United States of Monsters is a Dark Fantasy Urban Fantasy series by C.T. Phipps and Michael Suttkus which takes place in The Unmasqued World. It is an Affectionate Parody of the genre verging on horror comedy where everyone is a smartass familiar with monster tropes and movies but serious crimes occur.

Generally, the books all take place in Michigan either around Detroit (though not the Detroit of the real world but a Las Vegas/Dubai-esque vampire paradise) or a fictional small town called Bright Falls. The heroes tend to be working class monsters who do not follow the typical tropes of their genre.

The books in the series so far are: