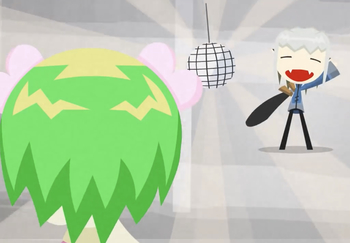 Sookie: [T]here's this vampire bar where Maudette and Dawn use to hang out at in Shreveport. You know it?
Bill: Fangtasia.
Sookie: Fang-tasia?
Bill: You have to remember that most vampires are very old. Puns used to be the highest form of humor.
— True Blood, "Escape From Dragon House"
Advertisement:

In Urban Fantasy settings where vampires exist, there is an interesting tendency for one or more of the vampire characters to own night clubs.

Naturally, when you (usually) can't go out during the day, subsist on the blood of humans, can't enter someone's home without an invitation, and are part of a mythological race that is commonly associated with sex, wealth, and a lack of inhibitions, such a business venture makes sense. You can operate during the night without anyone batting an eye, you can get your prey to come to you, and hey, everyone wants to have a little fun now and again even if they're dead, right?