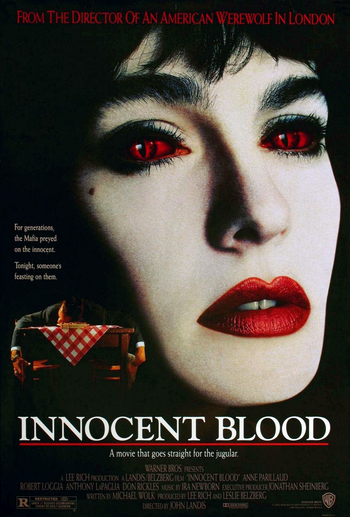 "I was sad, I was starved. It was time to treat myself, and I thought: What about... Italian?"
Advertisement:

A 1992 Black Comedy horror film from director John Landis in which, essentially, Vampires meet The Mafia.

In Pittsburgh, Friendly Neighborhood Vampire Marie (Anne Parillaud) lives from one night to the next, feeding on the city's criminal element. When a Mob War breaks out involving the crime family of Sal "The Shark" Macelli (Robert Loggia), Marie takes advantage of the violence to mask her own feeding, draining Sal's goons and then using a Sawed-Off Shotgun to ensure that they won't rise from the dead. One night, however, she makes the mistake of preying on Sal himself, and is forced to flee the scene before she can ensure that he stays dead.

Now empowered with the might of The Undead, Sal begins to assemble an army of vampires with which to take total control of the Mob. To survive and take the bloodsucking made men down, Marie must turn to Joe Gennaro (Anthony LaPaglia), a Cowboy Cop whose undercover infiltration of the Macelli family has threatened to destroy it. But can Marie and Joe stop Sal and his men before it's too late?