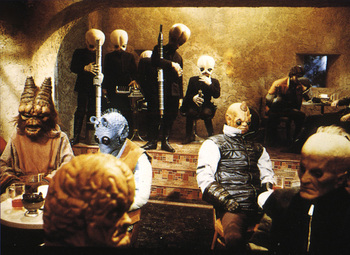 "I feel like Han Solo, you're Chewie, she's Ben Kenobi, and we're all in that fucked-up bar!"
— Jay, Dogma
Advertisement:

What better way to establish your sci-fi setting than to show a bar full of strange alien species? Bars, night clubs and cantinas are known for their varied clientele and as a gathering of diversity in itself. This is also an opportunity to show some more Starfish Aliens and other non-humanoids as background characters, taking advantage of the fact that they most likely will be seated (making things easier for the effects crew due to their legs being unshown). If it has waiters, they might be Green Skinned Space Babes or a Multi-Armed Multitasking alien, or both. Also expect an alien band playing music.

Also used in fantasy settings, normally with mythological creatures. It could be used to show cases of Fantastic Racism when a character is denied service because of its species. It is also very commonly a Bad-Guy Bar, and it's not uncommon to have a Bar Brawl either. Compare Bazaar of the Bizarre and Inn Between the Worlds, other places of business often visited by strange creatures.