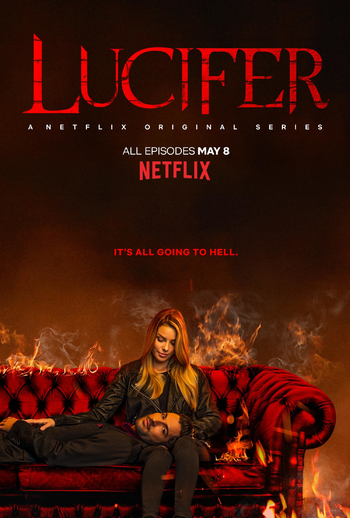 "Tell me. What is it that you truly desire?"
Dr. Linda: So you're the Devil?
Lucifer: Yes. Yes. Well, Satan, Beelzebub, Old Scratch. Actually, I like that one in particular. But, uh, those were the old me. These days, you just have plain old Lucifer.
Dr. Linda: And you've left Hell behind to take a vacation in Los Angeles?
Lucifer: Well, where else would I go?

Lucifer is an Urban Fantasy crime procedural that debuted on Fox in 2016. It's based (however loosely) on the character Lucifer Morningstar from Neil Gaiman's The Sandman and Mike Carey's Lucifer, both published by DC Comics under its Vertigo imprint.

Lucifer Morningstar, the Dark Lord himself, has grown bored with dealing with sinners in Hell, so he decided to move to Hollywood and live it up as owner of the nightclub Lux; however, when a young singer he's trying to help gets murdered in a drive-by shooting, he decides to provide unsolicited help to LAPD Detective Chloe Decker in solving the case. Intrigued by how Chloe doesn't seem to have a dark side that he can exploit, he continues to pursue a career in amateur crime fighting both because he wants to figure Chloe out and because it amuses him.

Seasonal cast members include Kevin Rankin as Malcolm Graham, a corrupt LAPD officer tasked to bring down Lucifer by Amenadiel (season 1); Tom Welling as Marcus Pierce, the latest lieutenant for the LAPD (season 3); and Inbar Lavi as Eve, the mother of all humanity (season 4).

The show was created by Tom Kapinos (creator of Californication) and the showrunner is Joe Henderson (White Collar and Almost Human) with Jerry Bruckheimer serving as an executive producer.

On May 11, 2018 (just three days before the airing of the third season finale), Fox canceled the show due to low ratings, with two episodes that were meant to be shown in a potential fourth season being aired two weeks after the finale. Warner Bros. subsequently shopped the series around and, after a month of fan campaign, it finally found a new home in Netflix. On June 23, 2020, the network renewed the show for a sixth and final season, which will consist of 10 episodes, adding up to 93 episodes in total.

In an unexpected turn of events, Ellis made a quick appearance as Lucifer during the 2019 Arrowverse crossover event, Crisis on Infinite Earths, revealing he is on Earth-666 (unsurprisingly), while a separate version of the character (to be portrayed by Gwendoline Christie) will appear in Netflix's adaptation of The Sandman.

There are unmarked spoilers ahead, especially regarding the revelation at the end of Season One that is treated as common knowledge by the characters later on. Be warned.

The Lucifer Title Sequence is just the name of the show with a chord from "Being Evil Has a Price" by Heavy Young Heathens.

The Lucifer Title Sequence is just the name of the show with a chord from "Being Evil Has a Price" by Heavy Young Heathens.