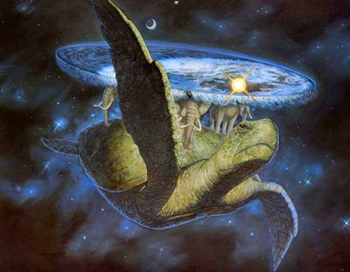 The turtle moves!
"Stories are important. People think that stories are shaped by people. In fact, it's the other way round. Stories... have evolved... The strongest have survived, and they have grown fat... Stories etch grooves deep enough for people to follow... A thousand wolves have eaten grandmother, a thousand princesses have been kissed... Stories don't care who takes part in them. All that matters is that the story gets told, that the story repeats."
— Witches Abroad, describing the Theory of Narrative Causality
Advertisement:

A world, and a mirror of worlds.

, a flat planet carried by four elephants standing on the back of a gigantic space-turtle (sex unknown), is the venue for Sir Terry Pratchett's long running fantasy series.

The first few books were a straightforward parody of Heroic Fantasy tropes, but later books have subverted, played with, and hung lampshades on practically every trope on this site, in every genre, and many not yet covered, as well as parodying (and in some cases, deconstructing) many well known films, books, and TV series, and eventually ended up at Urban Fantasy. The humour ranges from simple wordplay to wry reflections on the absurdities of life.

While all of the Discworld books exist in the same Constructed World, with the same continuity (and roughly in chronological order, with a few exceptions), many can be loosely grouped into different series,

following some of Pratchett's recurring characters. These include Rincewind

(which are usually mystery novels), the Lancre witches

(which lend themselves well to Shakespeare), and Death. Some books follow one-off protagonists who may or may not appear in supporting roles in other books.

In addition to the main characters, there is a large cast of recurring characters, including dodgy street trader Cut-Me-Own-Throat Dibbler and benevolent tyrant Havelock Vetinari. Villains have included sociopathic geniuses, Eldritch Abominations, and the Auditors of Reality, cosmic bureaucrats who consider life too untidy to be tolerated.

There are forty-one books in the series, six of them young adult, as well as several short stories. There are also Discworld calendars, diaries, maps, compendia, three Video Games,note Four if you include the Colour Of Magic 1986 text adventure five Board Games,note One based on the Watch, one on the witches, one based on a power struggle for Ankh-Morpork, the Defictionalised chess-analogue Thud and one based on the semaphore system and a pen and paper RPG, each with additional background information about the Disc. All the books have been adapted for the stage, two have become animated series, and three (technically four, as The Colour of Magic and The Light Fantastic were filmed as a single story under the former title, but the second is a direct follow-on) have become live-action Made For TV Movies. A police procedural based around the Ankh-Morpork Watch is in the works, and discussions are underway for cinema films of Mort and The Wee Free Men. There is also a cookbook.

Since Pratchett's passing in 2015, his daughter, Rhianna Pratchett, has taken over the management of the Discworld series. This primarily involves overseeing adaptations (potential and realized) based on Discworld entities, such as the BBC America series based on the City Watch, to which she was briefly attached as a co-writer, although she has since publicly distanced herself from the series and stated it is an In Name Only adaptation. She has stated publicly that the Discworld series belonged to her father, and him alone, and as such, she has no desire to write more novels in the setting, nor allow anyone else to do so.

See also the character sheet for details on the more major of the series' Loads and Loads of Characters, and the fan-run L-Space Web

(which unfortunately hasn't been updated since Going Postal, from 2004). There is a reading order guide

◊ for those who would like to go through the books by internal series chronology.

The work of collecting book annotations has been continued on the L-Space Wiki,

who have picked up the baton and assembled a catalogue of annotations for all Discworld novels since Going Postal, in the hoped-for event that the L-Space Web proper resumes full operations again. New contributors are always welcome!

The Discworld series was pre-dated by a science-fiction novel entitled Strata. While this isn't a Discworld book per se, it does prominently feature a flat Earth, and it does seem to contain the seeds of many ideas that would feature in the Discworld books later on. Good Omens, cowritten by Pratchett and Neil Gaiman, also featured a version of Death strikingly similar to the Discworld Death (right down to the blue eyes and THE VOICE), and had a similar overall tone, but took place on plain old Earth.

Warning: Some of the summaries contain spoilers.

The main Discworld novels, in order of release. Brackets denote date of UK publication and main character(s) — standalone indicates that it is not part of a series. note  Some sources (including the back covers of the Collector's Library editions) group the standalones based on concepts rather than characters, so Pyramids and Small Gods are the "Gods" or "Ancient Civilisations" series, while Moving Pictures, The Truth and Monstrous Regiment join the Moist books as the "Industrial Revolution" series.

Other Books and Writings

Short stories note All collected in A Blink of the Screen, along with various "squibs" written for fan events, the blurb for Cunning Artificer creations etc.:

For other Discworld media, see the Franchise page.

Tropes that are not specific to one character (or group of characters) and appeared in three or more books (anything else should go in those pages, since otherwise five-eighths of the tropes on this site would be listed):