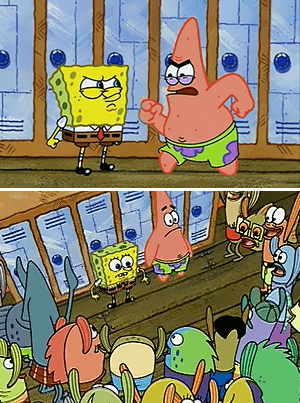 Fight! Fight! Fight!
"And at the words, as if they been some magic spell, the street suddenly seemed to wake from slumber. It seethed with human life. Maids popped out of windows, areas disgorged landladies, the very stones seemed to belch forth excited spectators."
— P. G. Wodehouse, "No Wedding Bells for Him"
Advertisement:

The hero and/or villain are about to face off. There's been a massive explosion. Something dramatic is going on. Suddenly, a crowd shows up out of nowhere to watch. Sometimes they serve to keep others from running, in a sort of human Ring of Fire, but more often they've simply Come to Gawk.

For some reason, even if the thing they're watching is dangerous, like a Mexican Standoff, they usually don't think of running unless it directly affects them. When the interesting event is over they go about their business like nothing happened.

They are often Apathetic Citizens, but they don't have to be. Sometimes the crowd provides assistance to the heroes or villains; however, such assistance is usually minor and may be only moral support. Compare and contrast Angry Mob, where the crowd that forms is out for blood with Torches and Pitchforks.

The inverse of this is when a building or hallway full of people clear the area with remarkable speed, panic and thoroughness, so that the hero and the villain can duke it out in an empty hallway, possibly with loose papers flying around. That reaction can often be a form of Crowd Panic. If the crowd appears out of nowhere to mock somebody, they're The Freelance Shame Squad.