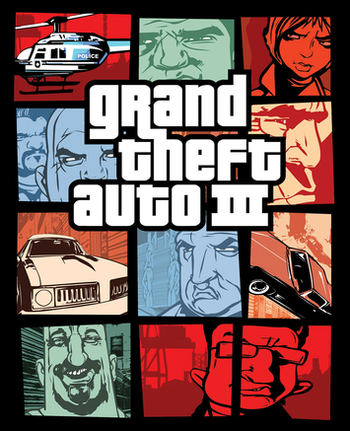 "I see nothing but good things for you, my boy..."
"Sorry, babe. I'm an ambitious girl, and you... You're just small time."
—Catalina
Advertisement:

In Liberty City, a Fictional Counterpart to New York, you play a silent, nameless note later games reveal his name to be Claude protagonist who escapes from a prison transport and climbs the city's criminal ladder. You are hoping to get revenge on your ex-girlfriend/partner in crime Catalina, who shot you and left you for dead after a bank robbery. It won't be an easy journey. Some will backstab you, and others will think you are in the way. But if you fight the good fight, this will be one hell of a ride.

Released on PlayStation 2, then on the Xbox and PC, then eventually got released on iOS and Android for its 10th Anniversary in 2011, and finally for PlayStation 5, PlayStation 4, Xbox Series X|S, Xbox One, and Nintendo Switch in a Compilation Rerelease alongside Grand Theft Auto: Vice City and Grand Theft Auto: San Andreas for the game's 20th anniversary in late 2021, with a version for mobile devices planned for the first half of 2022. This game was the first of the Grand Theft Auto series to actually feature a full-fledged 3D graphics engine that took advantage of the state-of-the-art hardware of its time to render an entire city, basically setting the roots for the Wide-Open Sandbox genre as we know it.