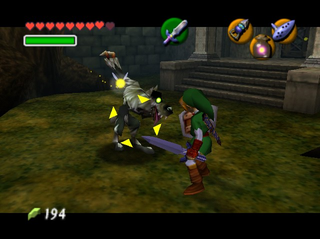 For your convenience!
Advertisement:

In a 3D console video game, whether third-person or first-person, the camera is of course a common problem, even without Camera Screw. In combat oriented games, keeping the camera on a target is perhaps the most important thing, hence this trope, which is when the camera locks itself itself onto a target location, moving and adjusting itself to keep the target onscreen while the player moves about. This is usually combined with directing the player's actions relative to the target, allowing them to circle-strafe around the enemy's attacks and quickly return fire.

This is most often activated by pressing a designated button, whether holding it down or turning it on or off. Other games initiate locking automatically, or apply "half" locking (with some camera control) automatically, with "full" locking when you press the right button. Some games allow switching between targets while maintaining the lock, and some games may automatically lock on to another target when the current one is destroyed.

It's not perfect, though. Locking the camera onto one enemy can limit the player's overall field of view, leaving other enemies out of sight where they can potentially attack the player from "behind", especially if there are a lot of enemies at once. Worse, unless there is a way to choose a target before locking, the game may lock onto something other than the intended target, which can result in a Camera Screw moment where the enemy can attack or flee while the player's view is disoriented (which also applies if there are many enemies at once). As a way to mediate this, games may display an icon over the enemy/object that can be locked on to, and sometimes even allow the player to switch this icon from one enemy to the next before picking their target.

Not to be confused with Missile Lock-On (although some games will overlap these), Fixed Camera.