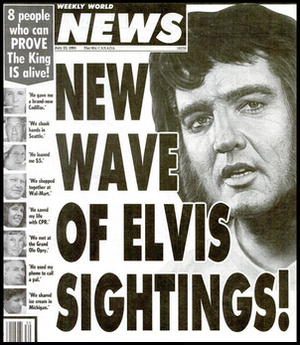 "I don't care what it says, I never laid a finger on him."
— Death, Good Omens
Advertisement:

In the real world, Elvis Presley died on August 16, 1977 at the age of 42. In common fiction, and in the minds of some in reality, Elvis is not dead. Whether through conspiracy, alien abduction (and later return), or retirement, he's still on Earth (or a variation thereof).

See Also: Elvis Has Left the Planet, where he is outside Earth.

This trope also has applied to some other musicians: for example, Tupac Shakur and hide both have rabid fans that insist both are still alive but just hiding. On the other hand, check out the story below of the folk rocker, Rodriguez, with whom this actually happened! And for an inversion, contrast the "Paul is dead" Conspiracy Theories regarding Paul McCartney.

Slowly became a Discredited Trope as the years passed into what would have been Elvis's old age, though it would persist by applying itself to more recent cases of celebrities who died in an infamously abrupt manner, including Tupac Shakur (compounded by the huge amount of recorded material he left, enough to fill quite a few posthumous albums), Michael Jackson and Whitney Houston.